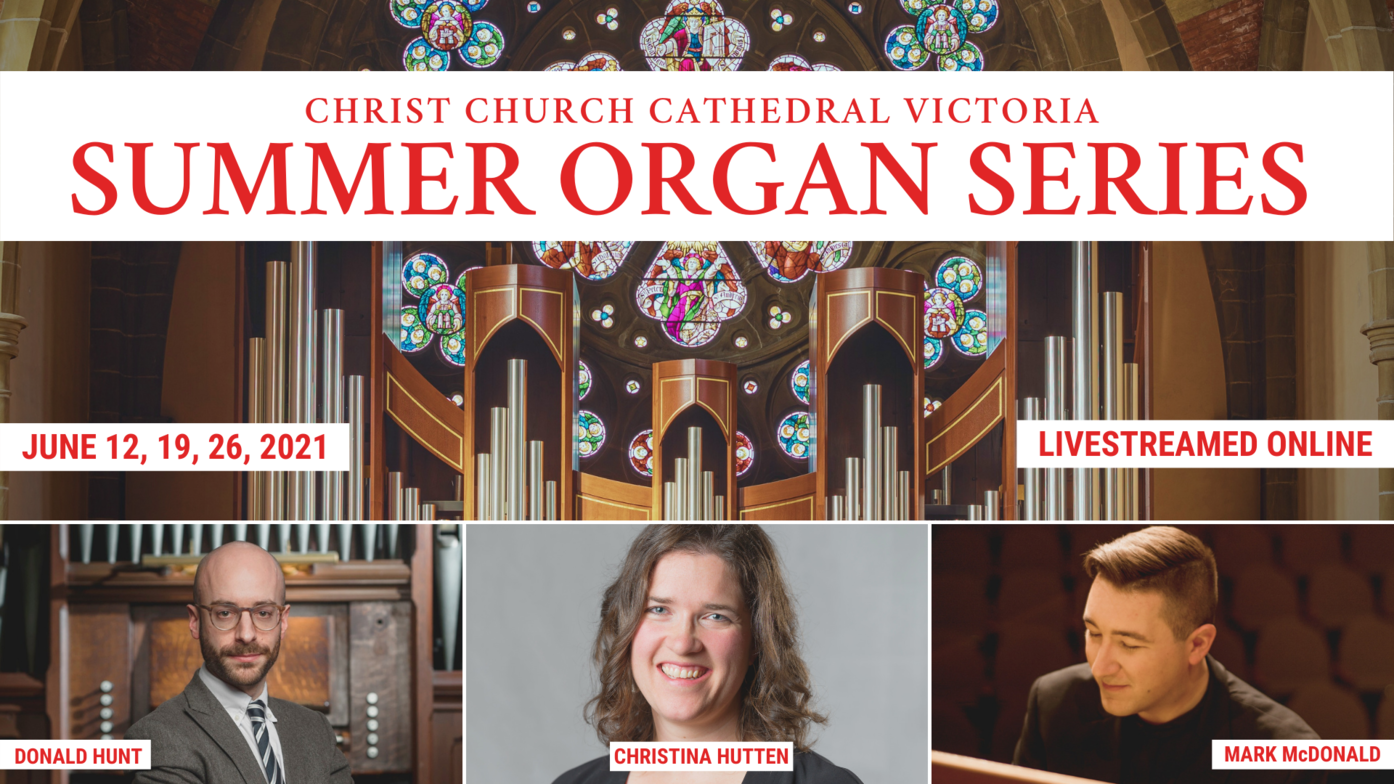 Hunt, Hutten, and McDonald will pay tribute to the great organist and composer Marcel Dupré (1886-1971), a monumental figure in the organ world renowned for his blazing technique and brilliant compositions. His music is noted for its extreme technical difficulty and it remains a challenge to organists even to this day. The three programs look at various angles of Dupré’s style – his devotion to past musical figures like the monumental J. S. Bach (Bach & Dupré), his roots in the rich tradition of Christian liturgical music and the Lutheran chorale (Luther’s Legacy), and his uncompromisingly virtuosic compositional style (The Art of “Impossible”).

The series begins on Saturday June 12 with a livestreamed concert featuring the cathedral’s new state-of-the-art camera system. Watch the livestreams online at the Christ Church Cathedral website, or on the cathedral Facebook page and YouTube channel. Donations are appreciated and help support the artists and the ongoing musical programming at the cathedral.

J.S. Bach has been a towering figure over every musician who has followed him, including Marcel Dupré - who famously performed all of Bach's organ works completely from memory! Donald Hunt opens the series with Bach’s monumental Toccata, Adagio, and Fugue and Dupré’s own transcription of Bach's Sinfonia from Cantata 29 in a program that brilliantly showcases the cathedral's Hellmuth Wolff organ.

Dupré was rooted in the long lineage of organists and composers whose primary duty was to the church. Christina Hutten explores the influence of the Lutheran chorale on Dupré, his contemporaries, and beyond. Featuring selections by Demessieux, Sweelinck, Brahms, Reger, Dupré, and others, including Bach's famous Passacaglia and Fugue in C minor.

Composed in the early part of his career, Dupré’s Three Preludes and Fugues, opus 7 are among his most often-performed works. The first and third prelude in particular, with their relentless tempo and four-note chords played by the feet, were pronounced "unplayable" by his teacher Charles-Marie Widor. Mark McDonald shows his mastery of Dupré's opus 7 alongside virtuosic selections by Vierne, Duruflé, Grigny and Alain.

A native of Halifax, Nova Scotia, Donald Hunt has served as Director of Music and Organist at Christ Church Cathedral, Victoria since 2017. He studied music at McGill University in Montreal and has held several distriguished posts in the UK, including at Truro Cathedral, St Paul’s Cathedral, London and St Mary’s Cathedral, Edinburgh. He is a first-prize laureate of the Concours d’orgue de Québec and has been a finalist in the Concours Prix d’Europe and the RCCO National Organ Playing Competition.   He has been heard live on BBC radios 3 and 4, including for the Scottish celebration of Her Majesty’s Diamond Jubilee. At Christ Church Cathedral, Victoria, he plans the liturgical music for three Sunday services, and directs several choirs, including a treble choir, formed in 2018 in partnership with Christ Church Cathedral School.

Organist and harpsichordist Christina Hutten has presented recitals in Canada, the United States, and Europe, including performances at the Oude Kerk in Amsterdam, the Hooglandsekerk in Leiden, Early Music Vancouver, the Universities of British Columbia and Calgary, and others. She performs regularly with Pacific Baroque Orchestra and has appeared as concerto soloist with the Okanagan Symphony, the Vancouver Academy of Music Symphony Orchestra, and the Arizona State University Chamber Orchestra. As a teacher, she coaches and coordinates the early music ensembles at the University of British Columbia and has given masterclasses and workshops at institutions including the Victoria Baroque Summer Program, Brandon University, the University of Manitoba, Wilfrid Laurier University, Canada’s National Music Centre in Calgary, and the Tafelmusik Baroque Summer Institute. She holds degrees and certificates from Arizona State University and the University of Toronto, and she is currently completing her doctorate in musicology at UBC.

Mark McDonald is recognized for his sensitive interpretations of a wide range of organ and harpsichord repertoire from early music to the avant garde. He has participated in several international organ competitions including Musashino-Tokyo (2017) and the Arp Schnitger (3rd prize, 2014) and has been featured as a soloist at several international festivals and series including the Royal Canadian College of Organists’ annual festival, the nouvellegeneration.orgue series at St. Joseph’s Oratory (Montreal), and the Redpath Hall series at McGill University. Notable collaborations include performances and recordings with Cirque du Soleil, NYO Canada, Victoria Baroque, and the highly-acclaimed Music for the Pause series. He holds degrees and diplomas in organ and harpsichord performance from McGill University, Queen’s University and the University of the Arts Bremen. He moved to Victoria in 2019 to serve as Assistant Director of Music and Communications Officer at Christ Church Cathedral.