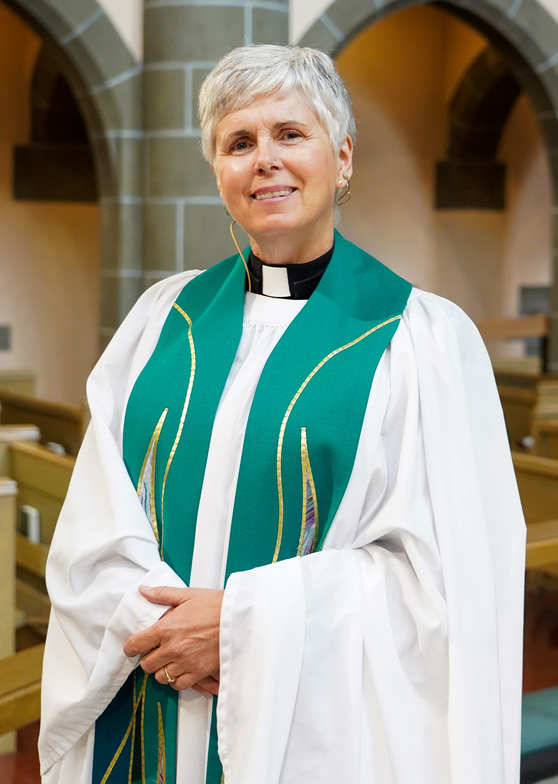 October 2022 - We welcome The Reverend Canon Jeannine Friesen as our Priest in Charge.  Jeannine will be with us at the Cathedral until a new Dean & Rector is appointed.

The Reverend Canon Jeannine Friesen was ordained in 1985 in the Diocese of Ontario (in eastern Ontario) and was the first woman in full time parish ministry in that diocese.  She has also worked in the dioceses of Calgary, Edmonton, British Columbia, and Ottawa. In addition to parish ministries, Jeannine was a Chaplain with the Canadian Armed Forces (CAF) where she served with the Royal Canadian Navy and with Canadian Army Head Quarters. When she released from the CAF, Jeannine held the rank of Lieutenant Commander and led the Fleet Chaplain team at CFB Esquimalt.

Jeannine and her husband, Canon Doug Friesen, have been part of the Cathedral community since 1993 when they were posted to Victoria from CFB Baden-Soellingen, Germany. Jeannine worked for a period as a Pastoral Assistant, visiting parishioners and administering home communion. It was a role she very much enjoyed. Later, both Doug and Jeannine became honorary assistants. Bishop Logan McMenamie appointed Jeannine a Canon of the Cathedral Chapter in 2014. Jeannine is the Secretary of the Board of the Community of the Cross of Nails (CCN)-Canada, the Canadian chapter of the CCN which is based at Coventry Cathedral in the UK.

Since her release from the CAF, Jeannine has been Interim Priest in Charge of St George’s, Cadboro Bay and St Michael and All Angels, Royal Oak. She enjoys the opportunity of working with parishes in transition and completed the Interim Ministry Program offered by The Interim Ministry Network earlier this year.

Jeannine and Doug are the parents of two grown children (and a lovely daughter-in-law) and are the staff to a sweet and feisty Bengal cat. Jeannine has a Nikon camera and takes far too many pictures but continues to enjoy photography in her spare time.

July 3, 2022 - Dean Ansley Tucker announced her intention to retire effective October 31, read her announcement and the bishop's letter to the parish here.