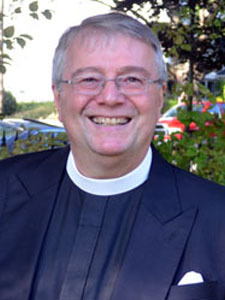 Ian is a bi-vocational priest of the Diocese, and as such he may be called upon by the Bishop to assist other parishes.

Many parishioners of the Cathedral will know Canon Ian Powell primarily in his roles as presider and preacher – on Sundays and festivals. These are roles which connect him to the gathered Cathedral community, but they are only half of what the wider community knows Ian for.

Many may not realize that until very recently, Ian’s full-time employment for the past 45 years was in the hotel industry. He is considered an elder statesman of the industry in BC and still serves on Provincial Boards. Ian’s last active role was as the General Manager of the Inn at Laurel Point, and prior to that at The Fairmont Empress.

As a respected businessman, he has countless connections within the business community and the Monday-to-Saturday world. Ian has been instrumental (and very generous) in facilitating cross-sectoral conversations with key community leaders about issues that matter. Not only do these gatherings have the potential to get the Church “at the table;” they also create the kinds of networks that are the foundation of ongoing fruitful collaboration. As our “priest to the city,” Ian serves as a knowledgeable and trusted intermediary between people of goodwill serving in sacred and secular arenas.

During this time when the Cathedral is exploring the “greater works” to which we may be called in the next 50 years or so, there is more need than ever for someone who can help us bridge the unnecessary divide between the church and the world.

Ian’s role as priest to the city is one of three staff positions at the Cathedral which carry no remuneration.