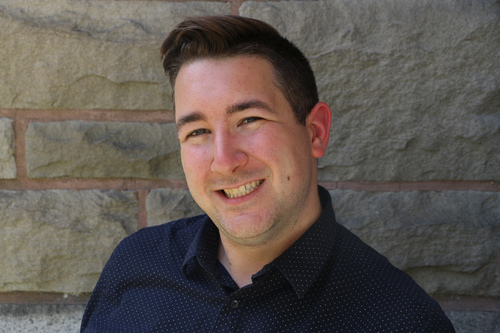 Versatile performer and teacher Mark McDonald (he/him) joined the Cathedral as the Assistant Director of Music in June 2019. McDonald is internationally recognized for his organ performance and has varied experience as a choral director and teacher.

Originally from Burlington, Ontario, McDonald earned a bachelor of music degree at Queen’s University, then moved to Montreal where he earned a master’s degree and a doctorate in organ and harpsichord performance at McGill University.

In just a few short months, Mark has made his mark on the Cathedral – both as a highly qualified and artistic musician, and as a valued member of the community. Mark’s role is part-time (28 hours per week) although he routinely works many more hours than this.

In addition to being the principal accompanist at services, rehearsals and concerts for all four cathedral choirs, he also shares conducting responsibilities; and, in his organ voluntaries, gives our Helmuth-Wolff organ a run for its money!

In the past, the Cathedral has typically had someone fulfilling one or more of these roles, but for fewer hours per week. However, with the expansion of our music program to include a substantial concert and recital component, as well as the development of a chorister stream within our Cathedral School, we can no longer expect volunteers to manage the very demanding “arts administration” side of these ministries. The Cathedral is rightly proud of its musical reach, and reputation – bringing thousands of people each year through our doors. About half of Mark’s time is devoted to concert promotion, organization and production – in addition, of course, to assisting with the administration of our own musical programming. Fortunately for us, Mark also brings experience and creativity in these areas as well.