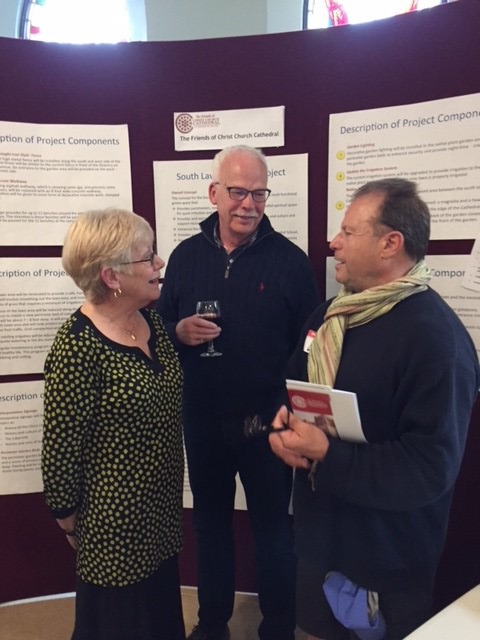 On the afternoon of April 7, about 50 Friends of the Cathedral spent an enjoyable afternoon at the Cathedral and learning more about its architectural secrets.  The afternoon started with tours that included climbing up the 71 steps of the Bell Tower to watch the Bellringers at work, and a stop at the Helmuth Wolff organ, where groups were regaled by Canon Michael Gormley as he explained and demonstrated the intricacies of this wonderful instrument.

David Barlow and Audrey Thomas led the groups through many areas of the Cathedral pointing out details of the building that were unknown to most.  After an hour or so the groups assembled in the Chapter Room, enjoyed some refreshments and listened to Canon Ian Alexander in interview with Canon Mary Barlow and David Barlow – the keepers of our Cathedral stories.

Following a period of Q and A and lively discussion, participants looked at various exhibits, including an update on the South Lawn project and eight scrap books that contained cuttings, photographs and documents from before 1929.  Maureen Piercey talked briefly about progress on the South Lawn project and participants were able to consider ways in which they support it.

Jan 18 - 25
Week of Prayer for Christian Unity
Jan 25
Building on the Foundation
Jan 26
Word of God, Word of Life