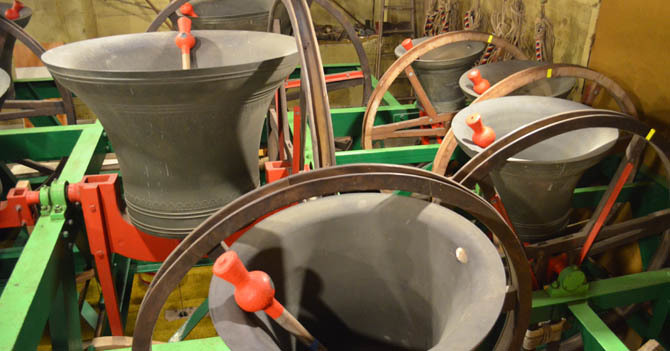 Our Cathedral is the Mother Church of the Diocese of British Columbia, which covers the whole of Vancouver Island and adjacent Gulf Islands. The corner stone for the present building was laid in 1926. Construction continued through the depression years of the 1930s. By 1936 the North West tower had risen to the height of the bell chamber floor and, through the generosity of two local donors, a peal of eight bells was installed on the top of this floor and a wooden shed was put up over the top to protect the whole installation from the elements.

Due to the economic conditions prevailing in the late 1930s and during the second World War, the upper portion of the tower was not completed until 1957. Construction of the remainder of the Cathedral was finally completed in 1986. The original eight bells were first rung on July 12th, 1936. Two trebles were added in 1983 and were dedicated on March 8th of that year in the presence of Her Majesty Queen Elizabeth II and Prince Philip, before being hung in the tower.

The Cathedral bells are hung for change-ringing in the style developed mainly in England in or about the sixteenth century. During the last few decades, there has been a considerable growth of interest in this method of bell-ringing on the North-American continent, especially in the U.S.A. While there are fewer rings of bells in Canada (currently only seven, three of which are in British Columbia) most of them pre-date that upsurge of interest.

For more detailed information, please read the PDF attached below