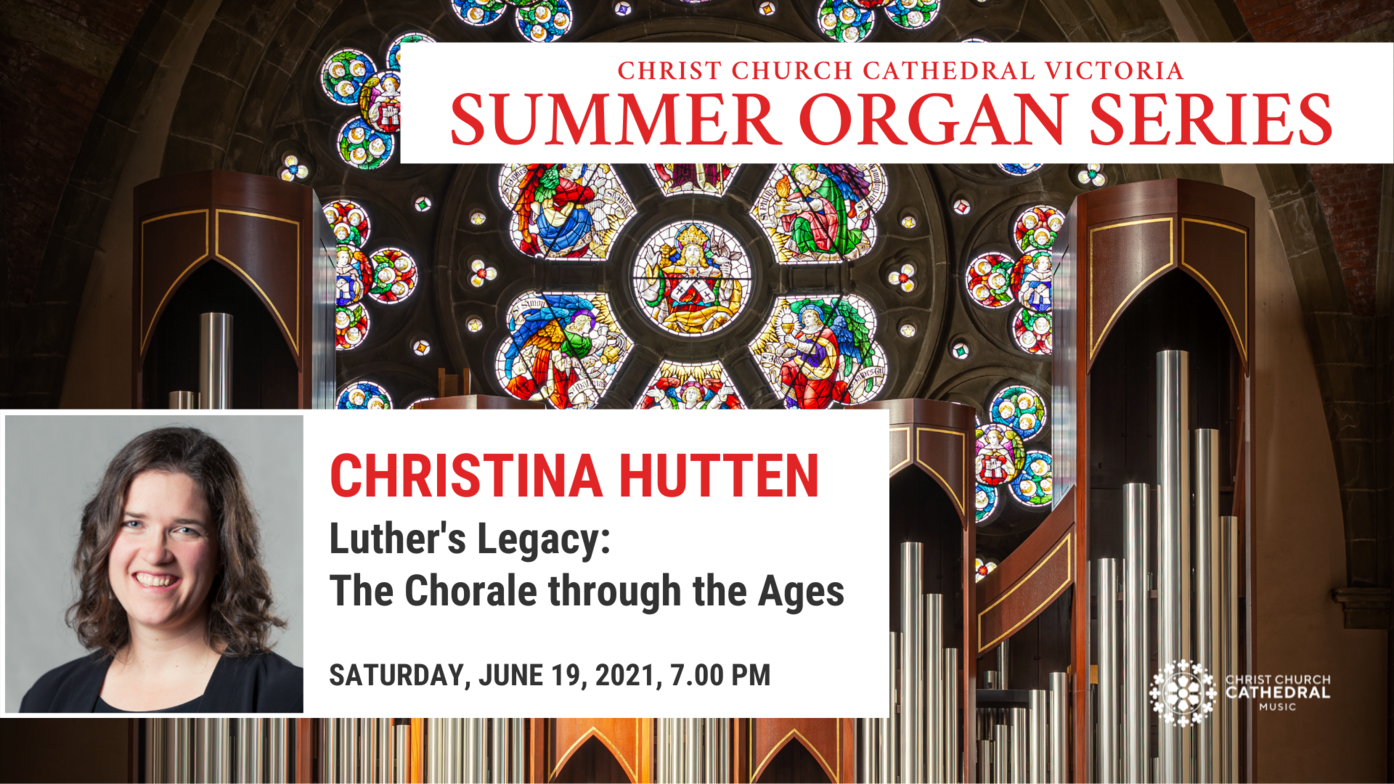 Dupré was rooted in the long lineage of organists and composers whose primary duty was to the church. Christina Hutten explores the influence of the Lutheran chorale on Dupré, his contemporaries, and beyond. Featuring selections by Demessieux, Sweelinck, Brahms, Reger, Dupré, and others, including Bach's famous Passacaglia and Fugue in C minor.

Our Father in heaven
Marcel Dupré

Organist and harpsichordist Christina Hutten has presented recitals in Canada, the United States, and Europe, including performances at the Oude Kerk in Amsterdam, the Hooglandsekerk in Leiden, Early Music Vancouver, the Universities of British Columbia and Calgary, and others. She performs regularly with Pacific Baroque Orchestra and has appeared as concerto soloist with the Okanagan Symphony, the Vancouver Academy of Music Symphony Orchestra, and the Arizona State University Chamber Orchestra. As a teacher, she coaches and coordinates the early music ensembles at the University of British Columbia and has given masterclasses and workshops at institutions including the Victoria Baroque Summer Program, Brandon University, the University of Manitoba, Wilfrid Laurier University, Canada’s National Music Centre in Calgary, and the Tafelmusik Baroque Summer Institute. She holds degrees and certificates from Arizona State University and the University of Toronto, and she is currently completing her doctorate in musicology at UBC.

With their direct language, engaging meter and rhymes, and memorable tunes, hymns are beloved expressions of faith and sources of comfort and of connection to others across generations and cultures. For centuries, chorales have been central to the organist’s art, as they have accompanied singing, preluded on hymn tunes, and created or improvised hymn-based music for concert performances. This program explores the rich diversity of chorale settings through the ages.

The oldest melodies featured in the program originated in the medieval church: the plainsong “Rorate caeli” that was later adapted into a well-known hymn, and the cantio “In dulci jubilo”, a dance-like Christmas song mixing Latin and vernacular text. “Erschienen ist der herrlich’ Tag”, an Easter hymn well known today in both German and English, was also based on an ancient Gregorian chant. The chorales “Allein Gott in der Höh sei Ehr” and “Vater unser in Himmelreich”, composed during the sixteenth century, set some of the most important liturgical texts, the Gloria and the Lord’s Prayer, while the tunes of “Als ein Hert (Psalm 42) and “O Haupt voll Blut und Wunden” began life as secular songs, becoming so popular that each is associated with several different hymn texts in many languages. The consoling hymn “Wer nur den lieben Gott läßt walten” responded to the trauma of the Thirty Years War and the devastation of plague in the mid-seventeenth century.

The chorale settings also range widely in style and historical origins from the simple, contrapuntal setting of “In dulci jubilo” from the St. Gallen Organ Book, imitating how hymns were sung in the fifteenth century; to the elegant homophonic setting from the notebook of Susanne van Soldt, a young Dutch girl living in sixteenth-century London; to the rich harmonic explorations of the four and five-part chorales of Bach, Reger, and Dupré; to the two verses of Böhm’s setting of “Vater unser in Himmelreich”, designed to be played in alternation with verses sung in unison by the congregation and in polyphony by the choir.  Some of the selections were teaching pieces, like Sweelinck’s variations on “Allein Gott in der Höh sei Ehr”, which survive in a manuscript along with many more variations by his class of pupils. Sweelinck used the variation form to explore the timbres and figurations possible on the organ as he played noon-hour organ concerts in Amsterdam’s Oude Kerk for merchants as they carried on trade in the church’s nave. Bach’s settings of “Wer nur den lieben Gott läßt walten” are preserved in a manuscript copied by his student Johann Kirnberger as well as the pedagogical notebook that he made for his son Wilhelm Friedemann and in the notebook of his wife Anna Magdalena. They must have been treasured by the Bach family.

Dieterich Buxtehude bequeathed to the world a style of preluding that presented the tune just once in a lightly decorated form with an accompaniment designed to capture the mood of the text and prepare the congregation for singing. Several of the settings on the program emulate his style, including Jeanne Demessieux’s “Rorate caeli”. Demessieux, the first woman to achieve international renown as a concert organist, learned her love of the chorale settings of Bach and Buxtehude from her teacher Marcel Dupré. This exquisitely gentle prelude on the chant whose text translates “Drop down, ye heavens from above, and let the skies pour down righteousness” was one of Demessieux’s personal favorites, appearing often on her concert programs. Her love of Bach was shared by Johannes Brahms, whose chorale preludes look back to Bach’s famous little book of organ chorales, the Orgelbüchlein, while incorporating expressive textures from Brahms’ own piano playing; and by Ethel Smyth, British organist and composer, influential suffragette, and the first woman to receive an honorary doctorate in music from Oxford University. Smyth received her formative musical training at the Leipzig Conservatory near the Thomaskirche where Bach worked for much of his life.

Perhaps Bach’s Passacaglia seems an anomaly on this chorale-based program, but several organists have noticed brief chorale quotations woven through this piece. It seems to me that his Passacaglia, likely written when Bach was very young, is a tremendous catalogue of all of the possible ways that an organist might play with a melody. The textures in it resurface again and again in his later chorale preludes. Just as Bach begins his Passacaglia with the theme all alone, so that listeners can easily grasp it and follow its transformations, I have paired the chorale settings in the program, beginning with one in which the melody is clearly audible, followed by a more elaborate treatment. I invite you to relish the fun of exploring cherished hymn tunes.